Catherine hails from Hull where, from an early age, she trained in music and dance. She later trained with

the Royal Ballet and at Birmingham Drama School.

She made her West End theatre debut in Hello Dolly! and played Phyllis Dale in the original cast of 42nd Street (Theatre Royal, Drury Lane), where she also appeared in the Royal Variety Show.  She starred as

Sally Smith in Me & My Girl, Young Sally in Follies, Helga in Budgie, the Musical with Adam Faith & Anita Dobson, and as Jennyanydots / Gumbie in Cats.

On tour, she fulfilled a lifelong ambition to play the coveted lead role of Louise in Gypsy, followed by Ado Annie in Oklahoma! Audrey in Little Shop of Horrors, Mrs. Fezziwig in Scrooge, Elvira in Blithe Spirit, and

the leading role of Phyllis Owen in Babes in Arms (Chichester Festival Theatre), amongst many other

Catherine joined the New Shakespeare Company at the Open Air Theatre in Regent’s Park as Assistant Choreographer, and played the comedy role of Evelyn in A Connecticut Yankee, and Bianca in The Taming of the Shrew, which then toured the Middle East.

She travelled the world for three seasons onboard P&O’s state of the art cruise ships, as Principal Performer in The Stadium Theatre Company. She also has her own cabaret business – Songtime Entertainment, which performs nationally and internationally.

Catherine regularly broadcasts for BBC Radio. She also appears on the original cast albums of Follies and Budgie.

Catherine teaches drama, and is well known as a Presentational Speaker, performing her autobiographical 60 minute Presentation, 'Catherine Terry-A Life Treading the Boards' for clubs and organizations around the country. 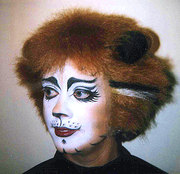